I was hanging out on the couch reading The Swiss Family Robinson to the boys this afternoon, when all of a sudden I heard the front door open (I always keep it locked). Next thing I hear is Hubby asking if anyone was home!!!! Oh My Gosh!!! I rushed off the couch, along with the boys, and ran for the front door. I cannot tell you exactly how Happy, and almost overcome I was at that moment. First to just hold him, then to see how happy and excited our boys were. Little Man wouldn't let him put him down at all. Of course, it only took the boys a few minutes before they looked to the suitcase and ask what was in it.

I will admit I was curious too, late Monday morning Hubby called me 3 times in about 10 minutes to talk Pashmina's, which is what I asked for. I remember asking him why he was doing it so late that night, and he commented that he had all week, but just wanted to get it done. I now know that he already planned to fly home the next day. The boys got some very nice carved elephants, something more too look at then play with. Two beautiful cushion covers, and a very lovely, very light weight, dark green Pashmina for me.

Back to the lovely sneaky Hubby LOL. The day before his Birthday, he warned me that he was tempted to turn his phone off so that no one could call to wish him a Happy Birthday. He is not entering his 40's with perfect grace, not like I blame him one bit though. So, even though the boys, and myself, were disappointed that we couldn't talk to him on his Birthday, I wasn't really all that surprised. I was surprised when I still couldn't get through to him last night, and especially this morning. At that point I was beginning to worry a little bit, as I'm sure most of you would too. Hubby tells me that he had originally planned to be home yesterday afternoon, but missed his connecting flight at Heathrow. It would have been wonderful to spend some time with him on his actual birthday, but I'm just glad he is home now.

When he walked through that door, I was really hoping that since he was home early, that he would be here for the weekend. Unfortunately he is flying down to New Mexico tomorrow afternoon, for an undetermined amount of time... most likely till next weekend. But, I will take any, and all time with him that I can. If he doesn't have much work in the morning, I will keep Paxton out of school. I think it is much more important that the boys spend as much time with him before he leaves as possible.

I now have a few loads of laundry to deal with, which I will do while watching one of my shows. And then I will be heading to bed early, I have Hubby to snuggle with tonight! Here are pictures of the cushion covers, and the elephants. 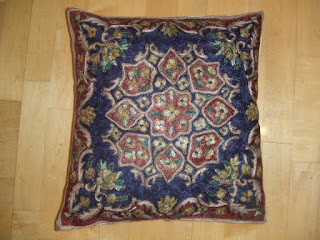 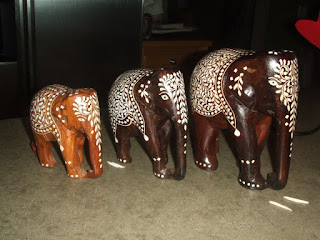 Created by FindingAnge at 7:11 PM