Another computer crazy kid in the making!!!!

We inherited a new computer recently... Hubby had to get it for work purposes, but it's no longer needed. So, it has now become ours!!! The boys LOVE IT!!! It is a new HP touch screen. Tonight Hubby decided to see what Little Man thought of it, I think we have another computer kid on our hands!!!

Created by FindingAnge at 10:33 PM No comments:

The boys had quite the exciting experience today! There was a false fire alarm 2 houses down from us, while the fire truck was out front we took them outside to see. Bug was extremely excited to see 'Fireman Sam'!!!! LOL One fireman even came over and gave the boys an Activity Book and some paper Fireman Hats. I suspect we will be hearing about this day for some time to come!!!

What fun the boys had at West Edmonton Mall on Saturday! Hubby took the boys, along with his sister, on these neat water bumper boats. Monkey really enjoyed playing with the attached water gun, it was a rather wet ride! We then headed over to the amusement park, and proceeded to enjoy the rides.

Sunday we went up to Grasslands to visit Tammy (another of Hubby's sisters), and her kiddos. On the way we stopped in Athabasca for breakfast, and enjoyed a nice little walk along the river. It was pretty early in the morning, so the boys got to see the frost on the ground. 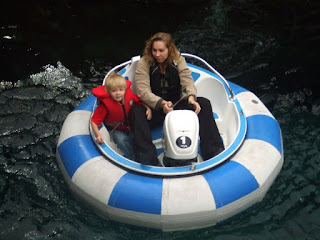 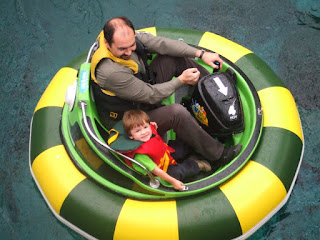 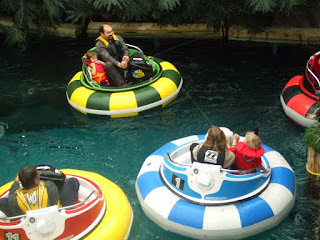 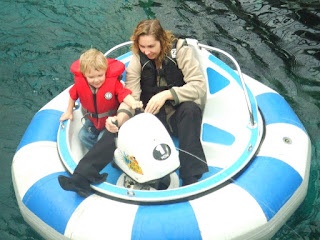 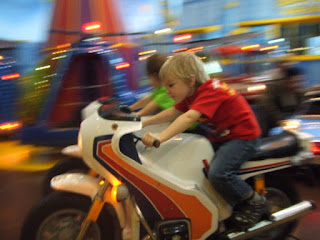 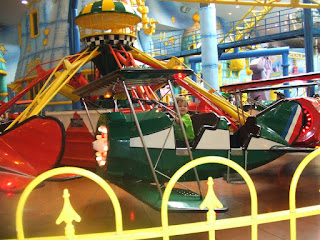 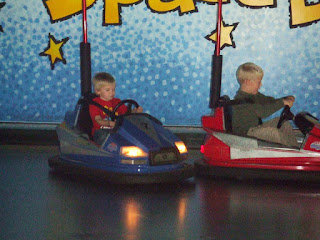 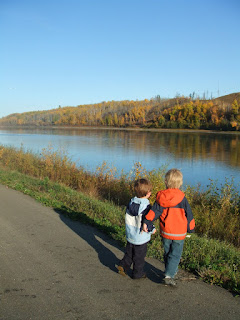 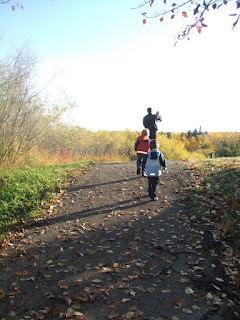 Why do these things happen....

So, things are going well, I've made it the gym a number of times... and then... it all comes to a screaching halt!!! While visiting Hubby's sister up North, I sprained my ankle rather badly! It sucks so much. It is hard to get the kids up and down the stairs, and just walking around is painful. Thankfully Hubby took Monkey to school this morning and then even took Bug to Gymaniacs to play, so it was just me and Little Man.

I suspect it will be a week before I am walking well again, not sure when I will get back to the gym. I was really enjoying my time there too, and was looking forward to start lifting weights soon. Guess it is all on hold till I can get around again.

We did have a nice visit with 2 of Hubby's sisters, although it is getting harder to do with the 3 kids. It's hard on them, and us to be driving 3-7 hours for a short visit, I suspect it won't be happening too often anymore.

I'm just thankful that Hubby is home right now to help me out with the kids... if I stand for more than about 10 minutes my foot starts to throb.
Created by FindingAnge at 5:04 PM No comments:

I'm not sure if this post will make any sense or not... I am having a hard time sorting out my thoughts these days. Even though the financial crises of the US has not happened here in Canada, does not mean that it won't and can't. It has me very concerned!!!! I'm not worried about paying the mortgage, but what is going to happen to the value of our house. We would already lose if we were to sell right now, and I worry about how much more we would lose next year... if things continue in the markets as they have been.

If we can sell without losing too much, I wonder if it's worth buying another property somewhere in Canada (with cash, no mortgage)... or if we should just jump ship and head somewhere that is not going to be as affected by the crises happening right now. It is something that is really weighing on my mind these days, and Hubby's as well.

As content as I have been to be closer to family and friends this past year, I also wish we had not come back?!?!?! I miss seeing new things, meeting new people, and experiencing a bit more of the world. The fact that we may be saddled with a house that we will lose money on just compounds my feelings of discontent.
Created by FindingAnge at 10:57 PM No comments:

Where did these crankies come from????

There must be something in the air today... cranky children seem to be everywhere!!!!! Bug seemed to go from one fit to the other seamlessly, Little Man just didn't want to do anything.... and Monkey... well... just wouldn't listen at all today! Thankfully they are all in bed and I can relax for a little bit... hopefully the crankies are gone by tomorrow!

We went out and got Monkey his new snowsuit and boots tonight... it's rather sad to think that Winter is so close right now. Now I just need to find something for Little Man to wear! Considering that this is boy #3, you would think that I already have something to use. Monkey didn't need warm clothes at this age, and Bug was living in England at this age, and we certainly didn't need snowsuits there. So, it looks like I will be hunting the consignment stores this next little bit.

I'm working on putting my down my thoughts about our plan to live aboard one day. I figure it's about time that I let everyone know about it all. Hopefully I can get it sorted out tomorrow if the crankies go away!
Created by FindingAnge at 9:11 PM No comments:

So, the time has come where nothing will be safe in the house... Little Man took his first steps last night!!!!! Truthfully nothing has been safe since he started crawling and cruising, but it always feels like it gets worse after they walk LOL. Being that it was only the first steps, I at least have a little longer to enjoy before he is all out walking. It's at moments like this that I wish we had a smaller house, especially a bungalow!

On one of the boards that I frequent, there was a thread asking to see pics of houses that are bigger than 3000 sq ft. It really amazed me how many people have larger houses, and yes, I am one of them! I do like this house, but for the stage of life we are in right now... it is a bit big and has rooms that we really don't utilize very much. Hmm.... guess I should plan some dinner parties or something... actually get some good use of the dinning room LOL.

It is the most dreaded time of day around here..... CLEAN UP TIME!!! It drives me nuts that I have to become a dictator to the boys to actually get anything done. So, tonight things will be a little different... oh the poor unsuspecting children! I am taking the bins, once they are full of the toys, and they are being put into the sewing room (which is kept locked). They will then be allowed one bin at a time, and will not get something different until the first is picked up. This should put a stop to the hour long, soul destroying, heart wrenching, time of clean up!!! Or so I can dream LOL.
Created by FindingAnge at 1:26 PM No comments:

Lactose Intolerance Sucks!!!! It really, really does suck! It's only been a few weeks since figuring out what is wrong, and it is so hard. I'm amazed at how many products contain Dairy, I don't think I have ever read labels as much as I am now. Every meal is changing... instead of toast with egg, it's a rice cake with egg. No more yogurt and cereal either. No cheese and crackers. The list is endless!!! I just hope that I can get it controlled, and find better snack/meal alternatives. I also hope it helps with my weight loss journey, that would be the best benefit of all.

Hubby came home last night, the boys were all excited to see him. I loved the smile that Little Man gave Daddy, it was full of so much joy. It was nice to have someone to talk to last night as well. As much as I enjoy my quiet evenings alone, I do miss having someone to snuggle and talk with. He says he doesn't have to head out again until next week, hopefully he can spare some time to spend with us before he goes. A little help in the mornings getting ready for school would be a true blessing.

The installation service for our new Pastor is this afternoon. I am looking forward to attending, but am dreading having the boys in church. I wonder when I will be able to enjoy a service, and not have to spend my time keeping the boys in line.... I have a feeling it is a number of years away!

Well, it's time to get the laundry going, and consider getting dressed and ready for the day.
Created by FindingAnge at 9:40 AM No comments:

And just where do they think they were going to go???

This was the conversation I had with my 4.5 year old this afternoon. Shortly after, I found his 2.5 year old brother on a chair in the kitchen taking my keys off the hook! They were of course quickly confiscated with a talk about taking Mommy's keys, but I would soon find out that I had the conversation with the wrong child! A very short time later I realized that all was too quiet as I tried to clean the kitchen up. A quick check around the house revealed no children, but a look in the yard gave me a surprise!

I found two little sneaky boys with the lock already off the side gate, using a key that Monkey had taken!!!! Argh!!!! Quickly make sure that the baby is safe, and run like hell to prevent my two crazy boys from escaping! I must admit that the looks on their faces when they saw me coming was priceless, although I don't think they were too impressed. I quickly locked the gate back up, and then turned to deal with my boys.

Truthfully I was a little too upset to deal with them at that point in time, so I sent them to their rooms while I had a chance to calm down and think. I could hear Monkey screaming for me to let him out the whole ten minutes that he was in there... he really does not like being sent to his room. LOL

So, I made dinner, went to retrieve them, had a chat, and then proceeded to have dinner. While eating up their P&J, I tell them that Daddy will most likely have something to say to them when he gets home... and my dear and lovely Monkey asked me to not tell him! Hahahaha! I quickly informed him that Mommy and Daddy don't have secrets and to not try that again.... poor little guy... learning so soon that we work as a team LOL.

Let's hope that tomorrow is a little more sane. Hubby is home, hopefully he doesn't have to leave again anytime soon... although I know better than to really get my hopes too high.
Created by FindingAnge at 10:09 PM 1 comment: