Well, Hubby is leaving Sunday for a week to go and party in England. Well, to be fair he will be working, it just bugs me this time since he will also be enjoying a nice evening out with the employees. I haven't attended a Christmas Party in about 3 years, and really miss getting together with friends and coworkers. This also means he will be missing both Monkey's, and Bug's Christmas Concerts! I will of course video them, but it just won't be the same.

We have a storm in the area tonight, with an between 15-25cm worth of snow expected to fall. The roads today were already bad enough, really not looking forward to what we might expect tomorrow. I really want Hubby to go and get the tree so that the boys and I can get it decorated on Sunday, but depending on the roads it may not happen. Could be a bit of a strange Christmas.

There is one good thing about Hubby being in England next week, he can get some presents for the boys while over there. I know that Bug would love to get a Fireman Sam Backpack, and there are a few other things he would love as well. Not 100% sure what Monkey would like, but I'm sure we will come up with something. I'm also hoping that he will get a Harrod's Christmas Bear, I have a few and would like to get more. It's about one of the only things I can afford from Harrods.

I tried to take some pictures of the boys for a Christmas card, yes I know I am rather late, but as is usual with the 3 of them... it was HARD to get them to all sit together. I will head down to the other computer tomorrow, and see if I can fix them up enough for a card... otherwise I might just have to quickly figure something else out. Here's the one I am hoping will work out. 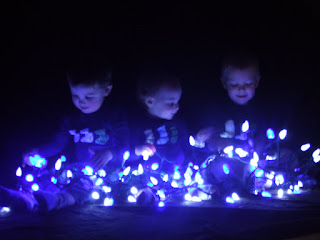 Created by FindingAnge at 8:31 PM